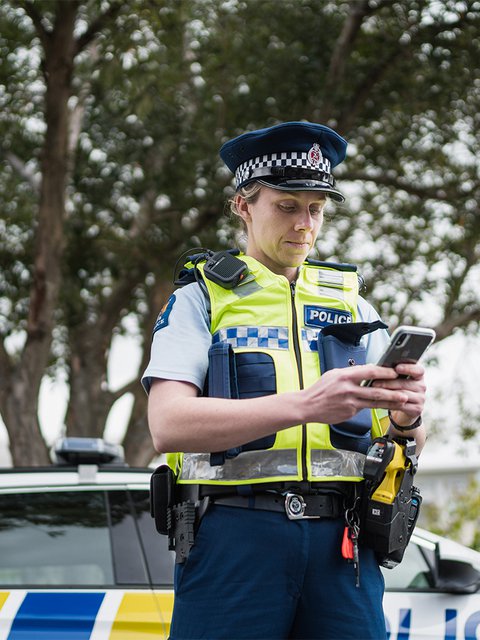 At Smudge, we believe in making people's lives a little easier every day, and we love taking on work that has a significant impact on society. Over the last six years, our partnership with New Zealand Police has resulted in groundbreaking work that squarely hits both these criteria.

Our relationship with New Zealand Police began in 2014 when we started work on an iOS app called OnDuty, the software cornerstone of a strategy to improve frontline policing by providing officers with smartphones. OnDuty has since been deployed to over 9,000 staff and has expanded into a suite of applications that collectively save New Zealand Police over 500,000 hours every year.

OnDuty enables frontline police to access intelligence in the field and to complete formal paperwork using smartphones. Since OnDuty is directly connected to the National Intelligence Database, the app has transformed the way New Zealand's frontline police collect, access and act on information.

Supt Rob Cochrane, Chief Information Officer at New Zealand Police, explains: "OnDuty helps us collect the information we need to collect, and send it wherever we need to send it, all electronically".

One of the core features of OnDuty is the ability for officers to query people, vehicles and locations. They can also search names, scan driver licences and search for related people, anytime, and from anywhere. Having these capabilities at their fingertips has been a game-changer for frontline police.

Prior to OnDuty, officers used a radio to make queries. Supt Cochrane explains: "When using the radio, we had to wait for a channel to become available and ask someone at the communications centre to look up a query. We now provide that capability when the officers need it, in a form that's really consumable through the phone. Since we've deployed OnDuty we've seen over 36 million queries. That means we've freed up time in the communications centres, allowing them to focus on their demand picture".

Being able to make queries is just the tip of the iceberg, OnDuty also allows officers to actively use and reuse information, and to add context to a situation by linking different queries. For example, if an officer pulls a car over, then that same car is stopped by another officer later in the day, the second officer is able to make a new note and link it to the previous one. This creates a "living chain" of information, and helps avoid information silos.

When it comes to actually taking action on information, such as creating a traffic crash report, police can also do this from within OnDuty. "Since our staff have the information at their fingertips straight away, they’re able to make better decisions in real-time situations", says Supt Cochrane.

Reports can also be shared with other agencies through the app, whereas before it often took several days. Supt Cochrane confirms: "The real power of OnDuty lies in being able to view, collect and share core policing information from anywhere in the field. This allows our staff to operate in a truly mobile environment, working with our communities to ensure they're safe. The benefits from OnDuty are realised throughout New Zealand Police".

Supt Cochrane concludes: "We conducted an early study that showed we are saving 30 minutes per shift per member. That effectively equates to half a million hours annually of time and capability that we have put back into the organisation".

The real power of OnDuty lies in being able to view, collect and share core policing information from anywhere in the field. This allows our staff to operate in a truly mobile environment, working with our communities to ensure they're safe. The benefits from OnDuty are realised throughout New Zealand Police.

hours saved every year by the app.

queries made in OnDuty every year.